The Story of Green Revolution in India 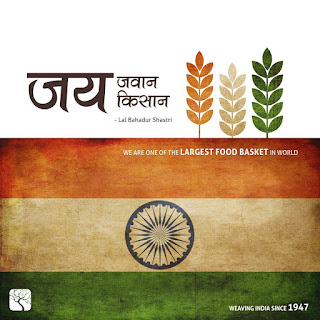 The Green Revolution in India was a period when agriculture in India increased its yields due to improved agronomic technology. It allowed developing countries, like India, to overcome chronic food defects. It started in India in the early 1960s and led to an increase in food production, especially in Punjab, Haryana and Uttar Pradesh during the early phase. The main development was higher-yielding varieties of wheat, which were developed by many scientists, including American agronomist Dr. Norman Borlaug, Indian geneticist M. S. Swaminathan, and others. The Indian Agricultural Research Institute also claims credit for enabling the Green Revolution,[1] in part by developing rust resistant strains of wheat.
The introduction of high-yielding varieties of seeds (hybrid seeds) and the increased use of chemical fertilizers and irrigation led to the increase in production needed to make the country self-sufficient in food grains, thus improving agriculture in India.[3] The methods adopted included the use of high-yielding varieties (HYVs) of seeds with modern farming methods.
The production of wheat has produced the best results in fueling self-sufficiency of India. Along with high-yielding seeds and irrigation facilities, the enthusiasm of farmers mobilised the idea of agricultural revolution. Due to the rise in use of chemical pesticides and fertilizers there were negative effects on the soil and the land such as land degradation.

Problems that were addressed

Low irrigation
The well irrigated and permanently irrigated area was only 17% in 1951. The majority of the area was dependent on rainfall and, consequently, agriculture suffered from low level of production.
The green revolution was possible due to adequate water supply through irrigation. The government undertook a number of minor, major and multipurpose irrigation projects to supply sufficient water to cultivable lands so that the dependence of farmers on rainfall reduced to great extents. The government also made provisions for digging canals, hand pumps, etc., for adequate and increased water supply.
Going forward, the government should create enabling mechanisms to fuel the growth in quality seed production. Public sector spending on irrigation, rural infrastructure (storage, post-harvest and connectivity) and credit availability are key inventions which will encourage farmers to invest in newer technologies as their returns would be better.

Frequent famines
Famines in India were very frequent during the period 1940s to 1970s. Due to faulty distribution of food, and because farmers did not receive the true value for their labour, the majority of the population did not get enough food.  Malnutrition and starvation was a huge problem.

Lack of finance
Small and marginal farmers found it very difficult to get finance and credit at economical rate from the government and banks, hence, fell as easy prey to the money lenders. They took loans from zamindars,who charged high rates of interests and also exploited the farmers later on to work in their fields to repay the loans (farm labourers) .

Lack of self-sufficiency
Due to traditional agricultural practices, low productivity, and a growing population, often food grains were imported — draining scarce foreign reserves. It was thought that with the increased production due to the Green Revolution, the government could maintain buffer stock and India can achieve self-sufficiency and self-reliability.
Agriculture was basically for subsistence and, therefore, less agricultural product was offered for sale in the market. Hence, the need was felt to encourage the farmers to increase their production and offer a greater portion of their products for sale in the market. The new methods in agriculture increased the yield of rice and wheat, which reduced India's dependence on food imports.
49% of people in India are employed in agriculture.

Criticisms
Indian Economic Sovereignty
A main criticism of the effects of the green revolution is the cost for many small farmers using HYV seeds, with their associated demands of increased irrigation systems and pesticides. A case study is found in India, where farmers are buying Monsanto BT cotton seeds—sold on the idea that these seeds produced 'natural insecticides'. In reality, they need to still pay for expensive pesticides and irrigation systems, needing to borrow from money lenders to finance their expensive change from traditional seed varieties. Many farmers are not able to pay for the expensive technologies, and especially if they have a bad harvest, they cannot pay back their debts, and many have committed suicide (600-700 a year in 2006/2007). This can allow larger farms, even foreign owned farming operations, to buy up the local small farms.
Vandana Shiva notes that this is the "second Green Revolution". The first Green Revolution, she notes, was mostly publicly-funded (by the Indian Government). This new Green Revolution, she says, is driven by private [and foreign] interest - notably MNCs like Monsanto. Ultimately, this is leading to foreign ownership over most of India's farmland.