The cultural Diversity in India 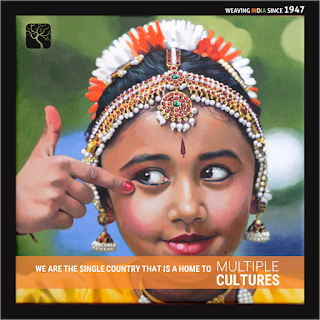 The diversity in India is unique. Being a large country with large population. India presents endless varieties of physical features and cultural patterns. It is the land of many languages it is only in India people professes all the major religions of the world. In short, India is “the epitome of the world”. The vast population is composed of people having diverse creeds, customs and colours. Some of the important forms of diversity in India are discussed below.

The unique feature about India is the extreme largest mountains covered with snow throughout the year. The Himalayas or the adobe of snow is the source of the mighty rivers like Indus. Ganga and Yamuna. These perennial rivers irrigate extensive areas in the North to sustain the huge population of the country. At the same time Northern India contains and zones and the desert of Rajasthan where nothing grows accept a few shrubs.

A race is a group of people with a set of distinctive physical features such set skin, colour, type of nose, form of hair etc. A.W. Green says, “A race is a large biological human grouping with a number of distinctive, inherited characteristics which vary within a certain range.”

The Indian sub-continent received a large number of migratory races mostly from the Western and the Eastern directions. Majority of the people of India are descendants of immigrants from across the Himalayas. Their dispersal into sub-continent has resulted in the consequent regional concentration of a variety of ethnic elements. India is an ethnological museum Dr B.S Guha identifies the population of India into six main ethnic groups, namely (1) the Negrito’ (2) the Proto-Australoids, (3) the Mongoloids (4) the Mediterranean or Dravidian (5) the Western Brachycephals and (6) the Nordic. People belonging to these different racial stocks have little in common either in physical appearance or food habits. The racial diversity is very perplexing.

Other administrative officers and anthropologists like J.H. Hutton, D.N. Majumdar and B. S. Guha have given the latest racial classification of the Indian people based on further researches in this field. Hutton’s and Guha’s classifications are based on 1931 census operations.

The second largest language, Telugu, is spoken by about 60 million people, mostly in Andhra Pradesh. Most of the languages spoken in North India belong to the Indo- Aryan family, while the languages of the South namely Telugu, Tamil, Malayalam and Kannada belong to the Dravidian family.

It is said that India is a “Veritable tower of babel”. In the words of A.R. Desai “India presents a spectacle of museum of tongues”.

This linguistic diversity notwithstanding, there was always a sort of link languages, though it has varied from age to age. In ancient times, it was Sanskrit, in medieval age it was Arabic or Persian and in modern times there are Hindi and English as official languages.

India is not religiously a homogeneous State even through nearly 80 per cent of the population profess Hinduism. India is a land of multiple religions. We find here followers of various faiths, particularly of Hinduism, Islam, Christianity, Sikhism, Buddhism, Jainism Zoroastrianism. We know it that Hinduism is the dominant religion of India. According to the census of 2001 it is professed by 80.05 per cent of the total population.

Next comes Islam which is practiced by 13.04 per cent. This is followed by Christianity having a followers of 2 03 per cent, Sikhism reported by 1.9 per cent, Buddhism by 0.8 per cent and Jainism by 0.4 per cent. The religions with lesser following are Judaism, Zoroastrianism and Bahaism.

Then there are sects within each religion. Hinduism, for example, has many sects including Shaiva Shakta and Vaishnava. We can add to them the sects born of religious reform movements such as the Arya Samaj, Brahmo Samaj, and The Ram Krishna Mission. More recently, some new cults have come up such as Radhaswami, Saibaba etc. Similarly, Islam is divided into Shiya and Sunni; Sikhism into Namdhari and Nirankari; Jainism into Digambar and Shwetambar and Buddhism into Hinayan and Mahayan.

While Hindus and Muslims are found in almost all parts of India, the remaining minority religions have their pockets of concentration. Christians have their strongholds in the three Southern States of Kerala, Tamil Nadu and Meghalaya. Sikhs are concentrated largely in Punjab, Buddhist in Maharashtra and Jains are mainly spread over Maharashtra, Rajasthan and Gujarat, but also found in most urban centres throughout the country.

India is a country of castes. Caste or Jati refers to a hereditary, endogamous status group practicing a specific traditional occupation. It is surprising to know that there are more than 3,000 Jatis in India.

It may also be noted that the practice of caste system is not confined to Hindus alone. We find castes among the Muslims, Christians, Sikhs as well as other communities. We have heard of the hierarchy of Shaikh, Saiyed, Mughal, Pathan among the Muslims, Furthermore, there are castes like Teli (oil pressure). Dhobi (washerman), Darjee (tailor) etc. among the Muslims. Similarly, caste consciousness among the Christians in India is not unknown. Since a vast majority of Christians in India were converted from Hindu fold, the converts have carried the caste system into Christianity. Among the Sikhs again we have so many castes including Jat Sikh and Majahabi Sikh (lower castes). In view of this we can well imagine the extent of caste diversity in India.

In addition to the above described major forms of diversity, we have diversity of many other sorts like settlement pattern – tribal, rural, urban; marriage and kinship pattern along religious and regional lines and so on.