India In Space- A leap towards the Future 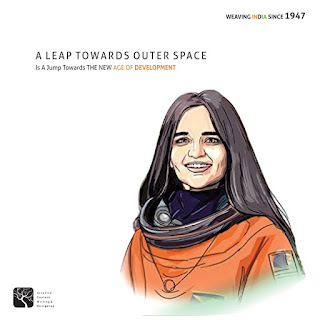 India’s progress in space has been very systematic starting with experimental satellites like Aryabhatta, Bhaskara, Apple and Rohini. It performed satellite application experiments like SITE, STEP and Apple application programme. The operational space services consist of INSAT system and Indian Remote Sensing Satellites (IRS). The Indian Space Research Organisation (ISRO) made a modest beginning in launch vehicles like SLV-3, and ASLV. The first development flight of the indigenous Polar Satellite Launch Vehicle (PSLV) was carried out in 1992 which could put 1,000 kg class remote sensing satellite into 900 km polar sun-synchronous orbit.
India has acquired eminence in world class space science. It has mastered modern space technology and its various applications for the benefit of society. New space technology is being utilised for telecommunications, television broadcasts, weather watch and for providing information relating to agriculture, forests, water resources and minerals to mention a few.
In the past three decades ISRO has built an infrastructure sector of space programme – construction and operation of satellites and their launch vehicles, ground station and sensors. ISRO has also collaborated with other Indian institutions and over 250 private industries. Both private and public sectors manufacture a vanity of equipment and materials – light alloy structure for inter-stages, motor cases, liquid thrusters, propellant tanks, gas generation and electronic packages. The second launch facility at Sriharikota at a cost of Rs.280 crore is under construction.

Launch Business
In May last year ISRO embarked on the launch business through PSLV-C2 launch, thereby creating a strong impact on the global space market by successfully launching two foreign satellites along with its own ocean monitoring remote sensing satellite. They were launched by the PSLV. ISRO’s marketing agency Autrix Corporation has entered the world market with great success. It aims to secure about 20 per cent of the global share of remote sensing products. It is gratifying to note that PSLV with certain modifications can put payloads up to 4,000 kg into low earth orbits (LEO’s) and up to 800 kg into geo-synchronous transfer orbits (GTO’s).
So far India has been dependent on Ariane Space, the French space agency, for launching its satellites. But gradually ISRO is trying to make use of its own launching vehicles. Sriharikota’s proximity to the equator gives it a better payload advantage for any polar launch. The flight of INSAT-3B, INSAT-3A and the GSLV will take ISRO into higher orbit. Once the GSLV is declared operational, India’s future INSAT satellites will be launched by this rocket.

Reduced Costs
The Chairman of ISRO, Dr K Kasturirangan has projected a significant lowering of space launch costs in the country in the next few decades. While the cost for positioning one kg of material in space today was $20,000 it was presaged that the same would come down to $5000 by 2007 and as low as $500 per kg between 2030-2050. Fully reusable vehicles have also been foreseen. He reveals hat the performance efficiency of Indian spacecraft is on the increase.
According to Aerospace America, Indian remote sensing commercial satellites are among the best in the world. IRS-1C and IRS-ID provide the best high resolution data to the user community anywhere in the world and the data from these satellites are being received and used by several countries including the US, Japan, Germany, Korea, Thailand and Dubai.
India has now established credibility as a space technology vendor. The world’s largest satellite manufacturer in the US has ordered satellite hardware worth US $700,000 from India. India’s space technology export earnings have tripled from around Rs.10 crore to Rs.30 crore over the past three years.

INSAT-3B
Recently, ISRO launched the first of the third generation communication satellite INSAT-3B. This 2,070 kg satellite is primarily intended for business, development and mobile communications. It would almost double the transponder capacity. It would provide the first set of transponders for interactive training and developmental communications as part of the Vidya Vahini programme announced by the Prime Minister.
Indian space scientists are now engaged in the development of cryogenic engine, required for GSLV in future. Last February the test of first home-made cryogenic rocket engine was carried out but a hydrogen leak probably led to premature termination of the test. But scientists say the problem will soon be solved. The test was carried out at the Liquid Propulsion Systems Centre at Mahendragiri in Tamil Nadu.
Experts agree that India crossed an important milestone in the development of indigenous cryogenic upper stage for GSLV. The engine had employed liquid hydrogen and liquid oxygen. This short duration test proved that many operations were successful which were done for the first time. Valuable data have been collected which are being analysed for further tests.

Towards Moon
Coming on the heels of all these developments is ISRO’s plan to go to the moon. ISRO has already begun preliminary studies to assess the feasibility of undertaking such a mission. ISRO’s satellite centre director, Dr P S Goel, says the study will cover scientific benefits which could be derived from the lunar mission. ISRO’s PSLV is a proven rocket and is capable of flying up to the lunar orbit. If India’s mission to the moon succeeds, then it would have joined the US and the former Soviet Union in making its presence felt in the lunar environment.
ISRO is also planning to launch a series of remote sensing satellites with a variety of applications including one solely dedicated to the field of astronomy.
Indian space scientists foresee several developments in the new millennium when they can scale new heights. Revolutionary developments in the fields of communication, information and micro- electronics are driving greater convergence and forging new directions for aerospace programmes. "Space would be a strong tool for development in future" sys Dr Kasturirangan. He is of the view that from development of civil applications such as personal mobile communications at a global level and management of natural disasters to futuristic vistas such as space power generation and space tourism the new possibilities are unlimited.


India’s experience has clearly shown that the investment in space always pays through remote sensing and telecommunications. By being fully self-reliant in space activities, it is certain that the resulting contribution from the space programme to the Indian GDP will be markedly significant.

Harish Agrawal
Posted by Unknown at 02:23