Unwanted Partition that Captured the Freedom in Two Nations 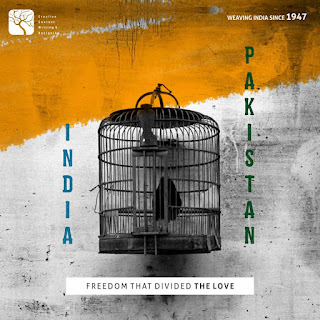 India and Pakistan won independence in August 1947, following a nationalist struggle lasting nearly three decades. It set a vital precedent for the negotiated winding up of European empires elsewhere. Unfortunately, it was accompanied by the largest mass migration in human history of some 10 million. As many as one million civilians died in the accompanying riots and local-level fighting, particularly in the western region of Punjab which was cut in two by the border.
The agreement to divide colonial India into two separate states - one with a Muslim majority (Pakistan) and the other with a Hindu majority (India) is commonly seen as the outcome of conflict between the nations' elites. This explanation, however, renders the mass violence that accompanied partition difficult to explain.

If Pakistan were indeed created as a homeland for Muslims, it is hard to understand why far more were left behind in India than were incorporated into the new state of Pakistan - a state created in two halves, one in the east (formerly East Bengal, now Bangladesh) and the other 1,700 kilometres away on the western side of the subcontinent.
It is possible that Mohammed Ali Jinnah, leader of the Muslim League, simply wished to use the demand for a separate state as a bargaining chip to win greater power for Muslims within a loosely federated India. Certainly, the idea of 'Pakistan' was not thought of until the late 1930s.
One explanation for the chaotic manner in which the two independent nations came into being is the hurried nature of the British withdrawal. This was announced soon after the victory of the Labour Party in the British general election of July 1945, amid the realisation that the British state, devastated by war, could not afford to hold on to its over-extended empire.

An act of parliament proposed a date for the transfer of power into Indian hands in June 1948, summarily advanced to August 1947 at the whim of the last viceroy, Lord Louis Mountbatten. This left a great many issues and interests unresolved at the end of colonial rule.
In charge of negotiations, the viceroy exacerbated difficulties by focusing largely on Jinnah's Muslim League and the Indian National Congress (led by Jawaharlal Nehru).
The two parties' representative status was established by Constituent Assembly elections in July 1946, but fell well short of a universal franchise.
Tellingly, although Pakistan celebrated its independence on 14 August and India on 15 August 1947, the border between the two new states was not announced until 17 August.
It was hurriedly drawn up by a British lawyer, Cyril Radcliffe, who had little knowledge of Indian conditions and with the use of out-of-date maps and census materials.
Communities, families and farms were cut in two, but by delaying the announcement the British managed to avoid responsibility for the worst fighting and the mass migration that had followed.

Many have wondered why the British and Indian leaders did not delay until a better deal over borders could have been agreed. One explanation is that in the months and years immediately following World War Two, leaders on all sides were losing control and were keen to strike a deal before the country descended into chaos.
Immediately before World War Two, India was ravaged by the impact of the Great Depression, bringing mass unemployment. This created tremendous tensions exacerbated during the war by inflation and food grain shortages. Rationing was introduced in Indian cities and in Bengal a major famine developed in 1942.
The resulting discontent was expressed in widespread violence accompanying the Congress party's 'Quit India' campaign of 1942 - a violence only contained by the deployment of 55 army battalions.
With the cessation of hostilities, the battalions at the disposal of the government in India were rapidly diminished. At the same time, the infrastructure of the Congress Party, whose entire leadership was imprisoned due to their opposition to the war, had been dismantled.
The Muslim League, which co-operated with the British, had rapidly increased its membership, yet still had very limited grassroots level organisation.
This was dramatically revealed on the 16 August 1946, when Jinnah called for a 'Direct Action Day' by followers of the League in support of the demand for Pakistan. The day had dissolved into random violence and civil disruption across north India, with thousands of lives lost.
This was interpreted by the British as evidence of the irreconcilable differences between Hindus and Muslims. In reality, the riots were evidence as much of a simple lack of military and political control as they were of social discord.
Further evidence of the collapse of government authority was to be seen in the Princely State of Hyderabad, where a major uprising occurred in the Telengana region, and with the Tebhaga ('two-thirds') agitation among share-cropping cultivators in north Bengal. A leading role was played in both by the Communist Party of India.
Elsewhere, the last months of British rule were marked by a naval mutiny, wage strikes and successful demonstrations in every major city. In all of these conflicts the British colonial government remained aloof, as it concentrated on the business of negotiating a speedy transfer of power.

Strong support for the idea of an independent Pakistan came from large Muslim landowning families in the Punjab and Sindh, who saw it as an opportunity to prosper within a captive market free from competition.
Support also came from the poor peasantry of East Bengal, who saw it as an opportunity to escape from the clutches of moneylenders - often Hindu. Both were to be disappointed. Independent Pakistan inherited India's longest and strategically most problematic borders.

At the same time, 90% of the subcontinent's industry, and taxable income base remained in India, including the largest cities of Delhi, Bombay and Calcutta. The economy of Pakistan was chiefly agricultural, and controlled by feudal elites.
Furthermore, at the division of India, Pakistan won a poor share of the colonial government's financial reserves - with 23% of the undivided land mass, it inherited only 17.5% of the former government's financial assets. Once the army had been paid, nothing was left over for the purposes of economic development.
The great advantage enjoyed by the Indian National Congress was that it had worked hard for 40 years to reconcile differences and achieve some cohesion among its leaders. The heartland of support for the Muslim League, however, lay in central north India (Uttar Pradesh) which was not included within Pakistan.
Muslims from this region had to flee westwards and compete with resident populations for access to land and employment, leading to ethnic conflict, especially in Sindh.

Post-partition and conflict over Kashmir

The death of Muhammed Ali Jinnah in 1948, the conflict with India over the Princely State of Kashmir (which both countries claimed at independence), as well as ethnic and religious differences within Pakistan itself, all combined to stymie early attempts to agree on a constitution and an effectively functioning civil administration.
This failure paved the way for a military takeover of the government in 1958 and later on, a civil war in 1971. This saw the division of the country and the creation of the separate state of Bangladesh. Ever since then, military rule has been more often than not the order of the day in both countries.

At independence, in India and in Pakistan, civil unrest as well as ethnic and religious discord threatened the stability of the new country. However, the assassination of Mahatma Gandhi on 30 January 1948 by a Hindu fanatic strengthened the hand of secularists within the government.
Indian politicians ratified a constitution, which led to the first democratic elections in 1951. This made India the world's largest democracy and consolidated governmental authority over the entire subcontinent.
However, major tensions have persisted among both Muslim and Sikh communities, which suffered most from the violence and land loss resulting from partition. These tensions erupted most seriously in the 1980s in a violent campaign for the creation of a separate Sikh state which led ultimately to the assassination of Indira Gandhi.

Renewed victimisation of Muslims has also occurred, notably with the destruction of the Muslim shrine at Ayodhya in 1992 and anti-Muslim riots in Gujarat in 2004. With such notable exceptions, however, India has maintained a remarkable level of cohesion since independence, especially if one considers that it is a country nearly the size of Europe.

For both India and Pakistan, the most singular conflict unresolved since partition has concerned the former Princely State of Kashmir, whose fate was left undetermined at the time the British left. Lying as it did on the border, Kashmir was claimed by both countries, which have been to war over this region on numerous occasions.

The conflict has wasted thousands of lives and millions of dollars, but is closer to a solution now than at any time since independence. If achieved, it might finally bring to fruition the dreams of Mohammed Ali Jinnah and Mahatma Gandhi and once more set an example for post-colonial societies elsewhere in Africa, Asia and the Middle East to imitate and follow.