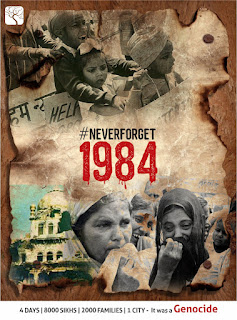 The blood shed in Gurgaon:

Gurpreet Singh was 16 when he watched his parents, two brothers, aunt and nephew burnt to death by a mob. The date was November 2, 1984.
The day the mob arrived at Badshahpur in Gurgao, Gurpreet’s neighbours hid him in their house, and from a window he watched the events unfold below. The mob of “at least one thousand” burnt down the gurdwara opposite his family’s house, before turning its attention to the family.

The six members of Gurpreet’s family were among those killed in Gurgaon and Pataudi, for whose families the one-member Justice T P Garg Commission has recommended Rs 12.07 crore as compensation.
“They began calling out to them to come down, reassuring them that no harm would be done,” Singh said, “My eldest brother went down, and the minute he got there, they gave a call to surround him, and burnt him alive.”
His other brother too was called down, and when he tried to flee, the mob allegedly caught him, beat him up and burnt him alive, some of the attackers even chopping off his fingers.
“After that, they set fire to our house, which brought everyone outside, and they burnt them alive,” Gurpreet said.
Other survivors of the 1984 anti-Sikh riots that took place in the wake of then prime minister Indira Gandhi’s assassination tell equally horrific tales of violence, robbery, rape and murder.
The riots led to violence and death all over the country. In Gurgaon and Pataudi, 64 people were killed — 47 in Gurgaon and 17 in Pataudi. In addition, survivors allege 21 commercial properties (stores and factories) were burnt in Pataudi, and 35 Sikh families were affected by the riots. In Gurgaon, they allege, 300 houses were burnt down.
Survivors of the riots say the nightmare continued even when they were taken into refugee camps, meant to shelter and look after them.
“They took us to camps and simply left us there,” said Surender Singh, who was 42 when the riots took place. “There were no provisions for food, water or latrines for us. We were cooking our own food and buying our own things. We had to manage ourselves.”
Families who left their homes intact when they went to seek shelter in refugee camps allege that, on returning, they found the houses ransacked, with their furniture, jewellery and even basics like utensils and bed-sheets stolen. They also allege that, in many cases, the authorities refused to acknowledge deaths, and did not file FIRs.
“Forty-seven and 17 are just the official figures, there are others that are not acknowledged,” is an allegation repeated in several families.
Pataudi, a village that had 35 Sikh families in 1984, now houses only 10.
Gurjeet Singh, who was hiding at a neighbour’s house during the riots, remembers the tales that were told of atrocities committed during the days of rioting.
“People were tortured to death, it was not quick. I have heard of women being stripped, and raped, after which rioters relieved themselves on them and then burnt them to death,” he said.
The effects of the 1984 riots were felt long after the violence subsided. Survivors talk of the way the events impacted the future of children in the community, many of whom could not be educated since their parents had died or been robbed to such an extent that they could no longer afford to send them to school. Marriages, too, became difficult since people had been looted to such an extent they were struggling just to survive, they said.
Survivors of the riots talk of the fear they feel even today whenever they hear of communal unrest anywhere. “We just close our shops and stay at home. We have already seen a lot. We’d rather be safe,” said a resident of Gurgaon, who preferred not to be named.
Though Sikh families in Gurgaon and Pataudi say images of atrocities committed during the 1984 riots haunt them even today, they don’t expect most of the perpetrators to ever be caught and punished.
They demand only compensation for what they have lost. They feel what various governments and courts have offered seem is “insufficient”. “All we want is the compensation that we deserve… In a democratic country, we are still waiting for democracy,” said one survivor.

Blood Shed in Areas of Delhi and Punjab:


I lived through the Sikh riots—and 30 years later, I’m not ready to forgive or forget

Complete details of the incident:
http://www.sikhsundesh.net/genocide.htm

Report from: The Indian Express